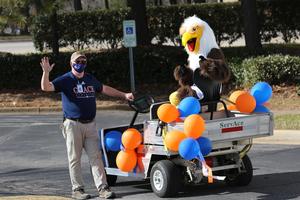 Want to learn more about today's Homecoming Festivities? Here's you'll find more information about our Honorary Alumni Recipients, Homecoming Court, and detailed info about how to watch the parade and games.

Unfortunately, additional fans other than those authorized by the athletic department are not permitted to attend the games, however, the games can be watched live using this link. In the summer of 2000, Lori and Tony Bosco chose GRACE Christian School even before they knew where they would live upon moving to North Carolina. Attracted by the warmth and community of GRACE, it wasn’t long before Lori got involved – helping out in classrooms, chaperoning field trips, and assisting with hot lunch. Before too long Lori joined the PTF, where she served in different capacities for over 10 years, including as Secretary and then President. Lori also co-founded the Care Team, enabling the greater GRACE community to rally around families in need with hot meals and whatever other kinds of help was needed. However, if you ask Lori what her greatest contribution to GRACE has been over the years, she might say that it was encouraging her husband Tony to get involved at GRACE as well.

It took Tony a few years (and some nudging from Lori) to get involved at GRACE with more than the typical “dad stuff” like field trips and parent nights. In 2005, Tony accepted a nomination to serve on the GRACE Board of Trustees. A couple of years later, Tony became Board Chairman. Having recently retired, Tony had the time to serve GRACE at a very high level relative to what previous Board Chairs could, and in typical “Tony style” he went “all in.” The following few years were a time of significant transformative growth for GRACE. Some of the highlights during those years were: championing the “technology distinctive” that GRACE is now known for in the Triangle; dramatic improvement in faculty and staff salaries; instituting the financial aid program for lower-income families to be able to become part of the GRACE community; and development of the athletic field.

Probably the single most transformative achievement during Tony’s service to GRACE was the acquisition of the Crossroads Ford property and its conversion to our Upper Campus. This included negotiating the purchase, convincing Hope to partner with us because the numbers didn’t work without them, and then co-developing the property with Hope to convert it from an auto dealership to the school that it is today. Tony says that “God gave him the vision, he just worked out the details.” In addition to his Board service, Tony contributed in other ways, including teaching an elective on the financial markets, advising the GRACE Stock Market Club, coaching the middle school soccer team, and along with Lori, being heavily involved with Athletic Boosters. Tony and Lori are thankful that God gave them the opportunity to use their time, talents, and resources to help make GRACE the school that it is today.

Alumnae of the Year Hailey Truitt grew up in Cary and attended GRACE from fourth grade through her graduation in 2014. During her time at GRACE, Hailey pursued interests ranging from cross country and Irish dance to international short-term missions. GRACE instilled in her a love for learning and education rooted in a biblical worldview.

After graduation, Hailey attended the University of North Carolina at Chapel Hill, studying Education and Psychology. She spent her time in Chapel Hill volunteering in the hospital, tutoring in the local school system, and cheering on the Tarheels! Hailey’s teachers and peers at GRACE encouraged her to seek strong, Christian community at UNC which Hailey found in the campus ministry, Cru. She engaged in outreach and Bible studies and later served as a student intern for Cru. Building on her mission experience at GRACE, Hailey developed a heart for ministry in Asia during her college years.

Following her graduation from Carolina, Hailey moved to East Asia as a missionary. Her passion for teaching, love for Asia, and desire to make Christ known led her to full-time ministry overseas. She spent almost two years learning the language and culture while working in college ministry. During the pandemic, she served in the role of team leader as Cru staff navigated displacement and returned to the U.S. Hailey hopes to return to ministry in East

Asia later this year. She is passionate about ministering to unreached people groups in East Asia and equipping college students to fulfill the Great Commission! A Special Thank You

Thank you to the following sponsors for generously providing convertibles for the Homecoming parade.